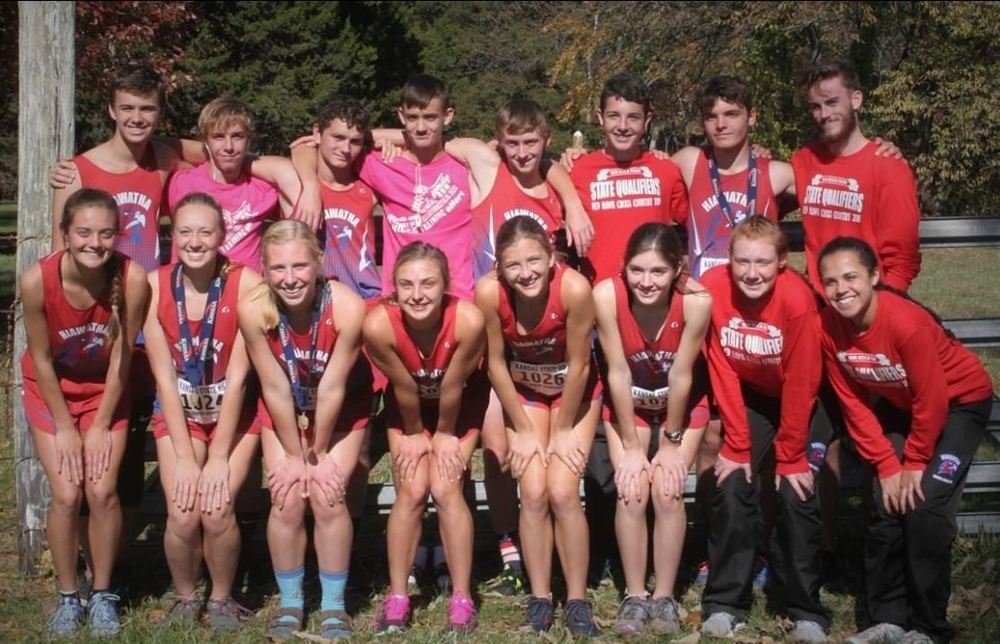 Hiawatha High’s very own cross country team took to the road for their state meet at Rimrock Farms on October 27. Our lady runners earned fifth overall, while our gentlemen runners earned eighth. Individual runners who placed include senior Mary Rosá (seventh), sophomore Kate Madsen (eleventh) and sophomore Justin Hodge (eleventh). To get to this point, though, the Red Hawks faced several obstacles, including illness and injury.

The training and troubles started in June with summer running. Summer running began at 7 o’clock each morning at the tennis courts. Red Hawk runners conditioned for the season and formed and maintained their relationships with each other.

Coach Becky Shamburg explained the tight-knit bond the team has.

“Everybody involved with cross country - athletes and families - will say we are a cross country family, and that is very true.  We develop that family atmosphere starting in June and that makes us run stronger as a team.”

One of the team’s senior runners, Elizabeth Kettler, was out for the summer, though, due to a track season injury. Kettler had to take summer running off to heal from the early stages of a stress fracture. It was the team’s family atmosphere that kept it together even though there were some nerves about having one of the top runners injured.

“Over the summer I was in a boot for a week and a half and [on] crutches for four weeks and then [in] physical therapy for six weeks, so I kind of had to start from scratch as far as training goes since I didn’t have any of my summer running. My coach did a good job of bringing me back in slowly but still bringing me back enough that I was still in shape. So that was definitely a challenge I’m glad we overcame.”

Sophomore Kate Madsen was not at her best level at the beginning of the season either.

“Early in the season I had [an] iron deficiency, so I wasn’t running very well. We didn’t know why for a long time and I was really tired all the time. It was just really discouraging because I was trying so hard and it just wasn’t working out.”

Again, the family-like relationships pulled her through.

“I’m just thankful that I have good teammates that, you know, kept me in running and kept me loving the sport even though it was really hard.”

The rest of the season went well until the Monday before the state meet. Senior Jasmine Morey fell sick with mono. Morey is also one of the girls’ team’s top runners. She pulled through, though, after several days off from school and was able to run her final State meet.

The troubles were not quite over yet, however. About a mile and a half into the race, Kettler collapsed.

“We’re not exactly sure why this happened, but from the get-go I kinda had this weird groggy feeling. Like not the normal ‘I’m in a race’ tired…” explained Kettler. “So basically I got to the mile mark and my elbows kinda started going numb and then I made it to the mile and a half area and I got really really dizzy and then all of the sudden my legs just gave out and I passed out on the side of the course.”

This was definitely a hard hit for the girls’ team.

In the end, both teams pulled through and claimed their places among the eleven girls’ teams and twelve boys’ teams.

“In my opinion we had another successful season.  Both teams were league champions. Both were Regional runner-ups.” Coach Shamburg summed the season up. “This is the sixth year in a row that the girls have competed at State. This is the second year in a row that the boys have competed at State. That is quite an accomplishment and should be celebrated. Individually we have three runners who earned All-State honors. Mary Rosa, Kate Madsen and Justin Hodge earned that honor. In fact, Kate and Justin have earned that honor two years in a row which is not an easy thing to do. I am proud of how my team did this year. They are a great group of athletes and just a great group of people too.”