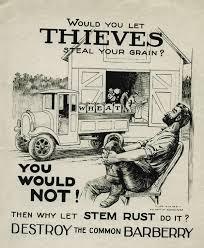 Just to educate you on some forgotten history, lat's throwback to the early 1900s in the easternmost region of the Midwest when the U.S. government was trying to eliminate millions of barberry bushes because they host the sexual stage of wheat stem rust (which, to be fair, is a very devastating wheat disease) and they launched a campaign to get farmers to kill all the barberry around their fields except it turned out that people weren't just planting barberry bushes as ornamentals like the government thought, there was seriously barberry everywhere!

It turned into full barberry warfare, with a volunteer effort on the farmers’ ends and a bunch of professional barberry killers on the government’s end. The government imposed fines for not removing barberry bushes. At first, they just ripped them out, but the bushes started growing back like crazy from roots left in the ground, so they experimented with chemicals and dousing them in gasoline and setting them on fire before finally settling on just ripping out the plant and then dumping up to 100 pounds of salt, proportionate to the size of the barberry, into the hole. They had to bring the salt in on trains just for filling barberry bush holes and published a bunch of anti-barberry bush propaganda, like this.